The first one is a Lunatone and a Clefable. I feel like there's a special bond between the two. According to the original Pokedex entry, "Lunatone was discovered at a location where a meteorite fell. As a result, some people theorize that this Pokémon came from space." Clefable gather around a moon stone to dance on nights of the full moon. Some evolved from Clefairy because of this moon stone. Clefable have very sensitive hearing and tend to hide in quiet places far away from people. The Diamond Pokedex says that Clefable are "rarely seen by people, it is said to be drawn by the full moon to play at deserted lakes." Both Lunatone and Clefable seem to have a connection to the moon, so I think the two must be happy together :) 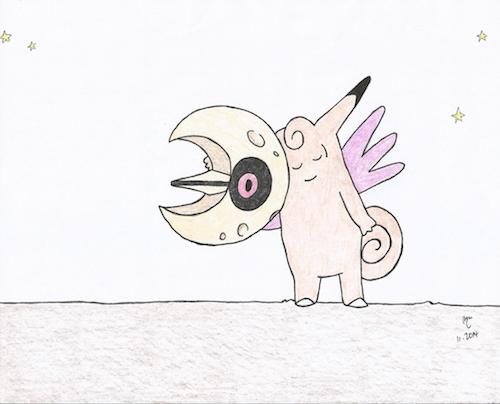 The other drawing is a group of grass-type Pokemon: Leafeon, Chespin, and Virizion. Grass is my favorite type in the game - maybe because Chespin was my first Pokemon ever! I've been training a Leafeon and hope to take him to battle the Elite Four. Leafeon's personality seems so calm and Chespin seems so bright! I recently acquired a Virizion, which has really been neat! I love the design and quiet confidence of Virizion, a Pokemon of justice. I think the three of them must have a lot of fun racing around the forest, hehe! 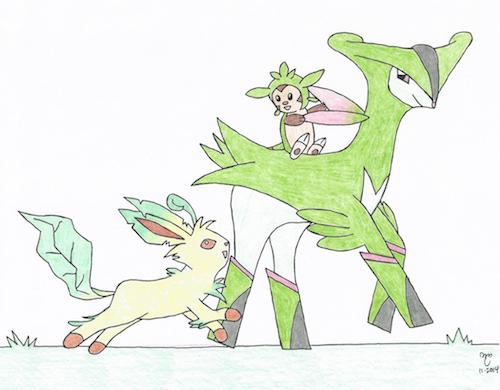