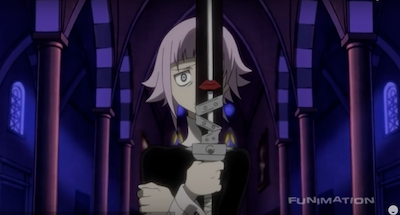 There's a move in an anime that I find really interesting. Crona, the shy, nervous character, uses this attack. In Japanese it's called 悲鳴共鳴 himei kyoumei. It's translated as "Scream Sympathy."

To conduct the attack, Crona holds her longsword, Ragnarok, before her and syncing their soul wavelengths, the sword lets out a resonating scream. The air around them is shaken by the noise. The danger in this move comes not from the way that the sword is swung, but in its stillness.

The contrast is what fascinates me. On the one hand, Crona is an extremely timid, restrained character. Throughout the anime, Crona is often found curled up in a corner with a pillow. And yet, "Scream Sympathy" is very vocal, expansive, and powerful attack. It reaches out into the corners, filling the entire room with its screeching frequency. When Crona and Ragnarok join in battle, it's almost as if the polarizing forces cause a freeze response that implodes and then explodes. Aggression and submission. Silence and noise. Screech Resonance.

"Because I'm scared." "Everything scares me."