I wanted to post pictures of some of the mammals that we've seen around the house here in West Milton. Here's Wikipedia's page Mammals in Pennsylvania that I used as a checklist. 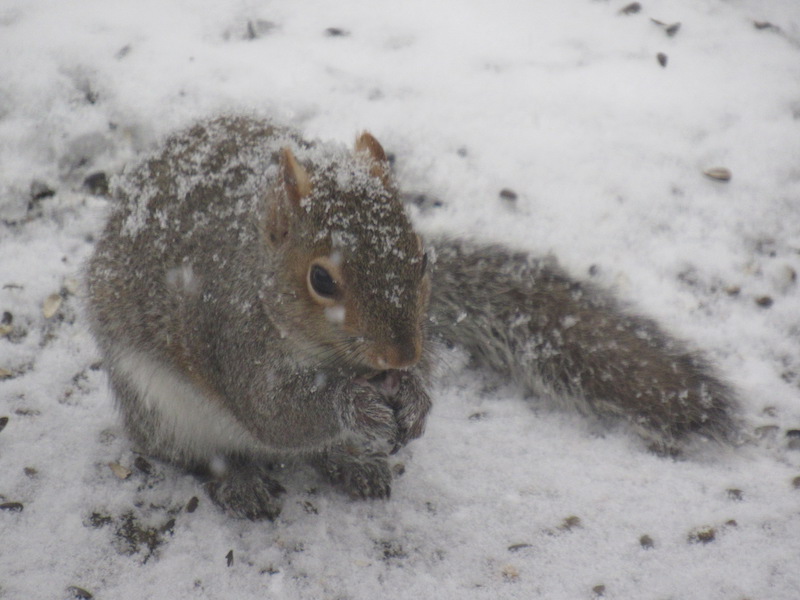 Eastern Gray Squirrel - The squirrels come to eat from our bird feeders and drink from the bird bath. They hide in the pine tree, so I'm guessing they live there. This one was eating during a snowfall and was getting covered in snow! What a rascal :P 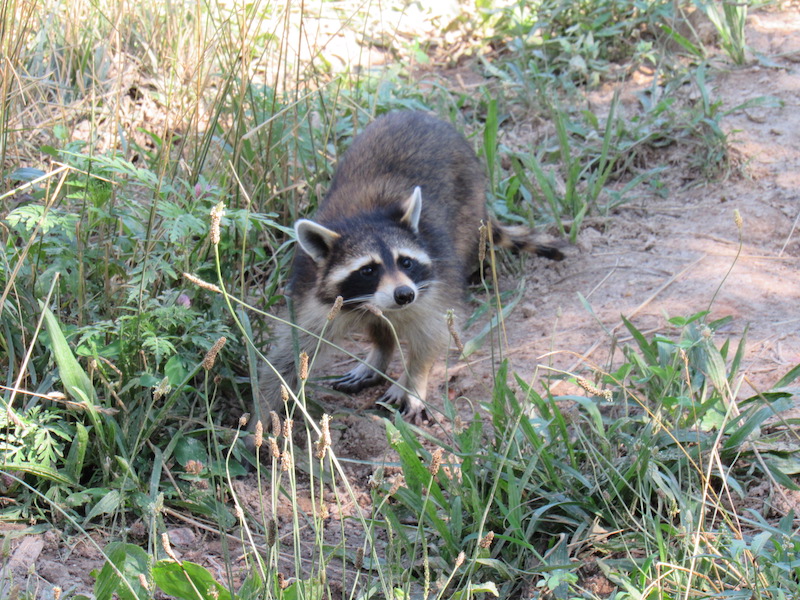 Raccoon - This photo was taken at Richmond Zoo, but I have seen raccoons around. I got to see a family walking into the cornfield last summer one night when I drove home. Their little eyes lit up as they stood and watched me from the side of the road. I saw a family walking over to the canal once, too. 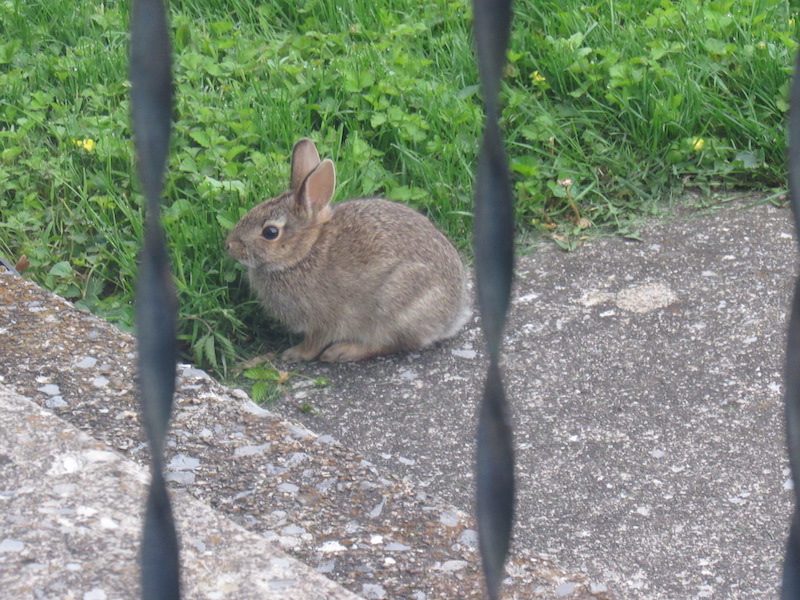 Eastern Cottontail - We have a bunch of bunnies in our neighborhood. We've watched them jump and play, eat the clover, and lay out in the shade in the summer. They're really cute and beautiful animals. 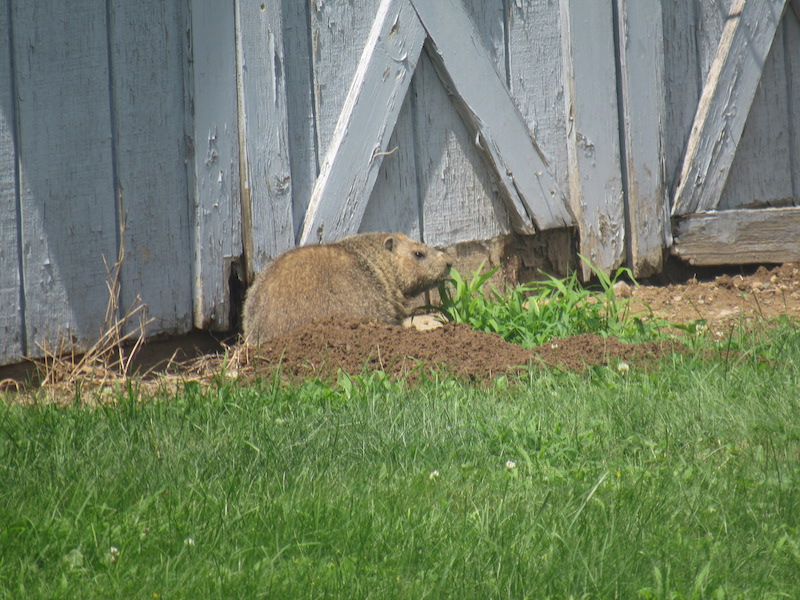 Groundhog - This groundhog lived under our neighbor's shed and was in the act of digging out his burrow when I took this picture. He was funny to watch - digging, then stopping and pointing his nose and listening for danger. I wonder where all the burrows go underground... 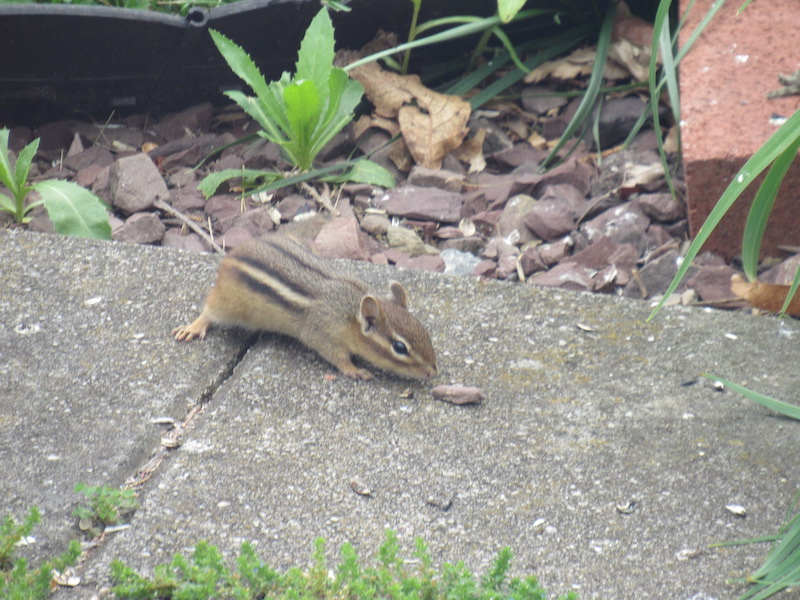 Eastern Chipmunk - It's hard to see these little guys, but we hear them on the roof sometimes! They are adorable, but their chewing can cause some damage :O 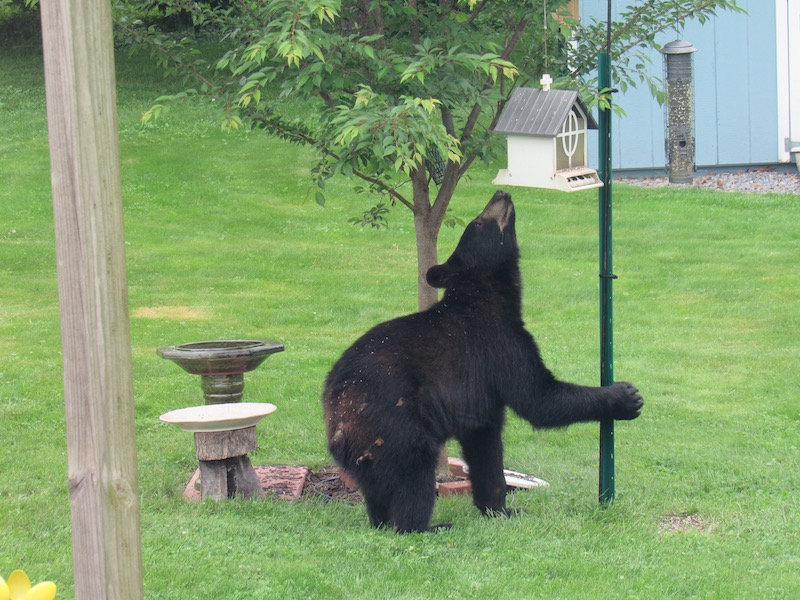 American Black Bear - This fellow visited our yard last June. WOW! We only saw him once, but that was enough for me :P He busted up our bird feeders to eat the seed, but Dad later retrieved and repaired them. 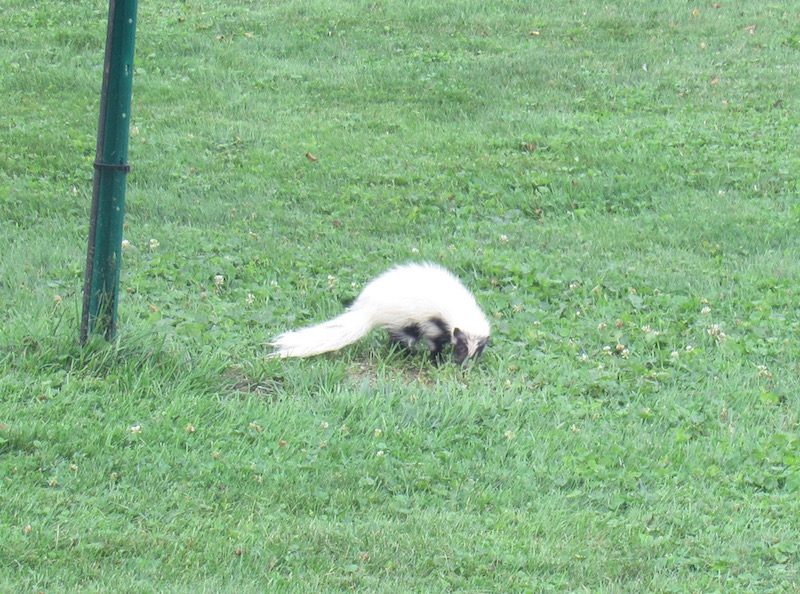 Striped Skunk - We've had skunks in the neighborhood for years, but we rarely see them. Last summer, we saw this white skunk visitor. Dad got his photo for me :) The skunk came to eat bird seeds off the ground. In the past, skunks have dug up our yard to eat grubs. They're nocturnal, so it's really rare to see them.

We've seen Opossums around, but I didn't have a picture of one. I once saw one out the window and thought it was a cat - until I saw its tail! :O I kind of think they're neat animals. They're actually a marsupial, like kangaroos! I think they're the only marsupial in North America.

We have a lot of White-Tailed Deer here, too, but we've only seen one in our yard once in all the years we've lived here. They're beautiful, but it scares me when I see them near the road when I'm driving... The township just north of here is called White Deer, named after these animals.

Once, quite a few years ago, our neighbors reported seeing a Bobcat on the hill. I never saw it, but they said it was near the woods. Wild cats scare me, so I'm glad I didn't run into it.

I saw a Grey Fox once, foraging along the side of the road. Grandma told us that she's heard baby fox pups barking at night time. They must be so cute <3

I saw a Mink once at Penn's Creek while at a picnic with our church. We were looking at the crayfish in the water and saw this small, dark, long, furry creature slip up the grassy bank. I didn't even know what a mink was at the time. :O I was pretty young, but I still remember that.

We have Muskrats and Beavers at the local ponds, too. Mom says that they used to have them at the pond when she was a kid. It's really neat to see how they build their forts in the water.

One of our elders at church has Flying Squirrels in his yard. He gives them peanuts and peanut butter and has taken photos of them.

Of course, there are mice around, too. I don't usually see them (which is probably a good thing). I remember one time when I was in Gettysburg at the Pennsylvania Memorial. One of my classmates and I went to Little Round Top to visit. When it was starting to get dark, a little field mouse ran down the stone steps near us. I wasn't scared, but my friend jumped! We hurried back quickly after that, hehe. I don't like it when the mouse makes his home in the basement, though...

Wow, there are a lot of mammals that live around us :) What a blessing to be able to see these creatures that God has made <3
Collapse