Today we finished studying the account of Abraham in Genesis. I spent some time this afternoon drawing out some notes to help me understand the relationships between Abraham and his brother's family. I thought I'd post them, in case anyone else might find them interesting. The map is not to scale and the shapes of the lands/waters are not accurate, but hopefully it at least gives you an idea of the region :)

In Genesis 10, where the descendants of Noah and their associated regions are described, each son's listing seems to follow a general clock-wise pattern. For example, Japheth's first son is associated with Europe, then moving north-east, west, and again north. Maybe I'm oversimplifying it, but it was something that I noticed as I went through the lists and marked them on the map.

Using Blue Letter Bible's Chronological Map, it appears that when Abram was born, there were 10 generations of his ancestors living at the time! (Noah - Shem - Arphaxad - Salah - Eber - Peleg - Reu - Serug - Nahor - Terah - Abram) The interesting thing is that the first of these to die was Peleg ("in his days the earth was divided"). 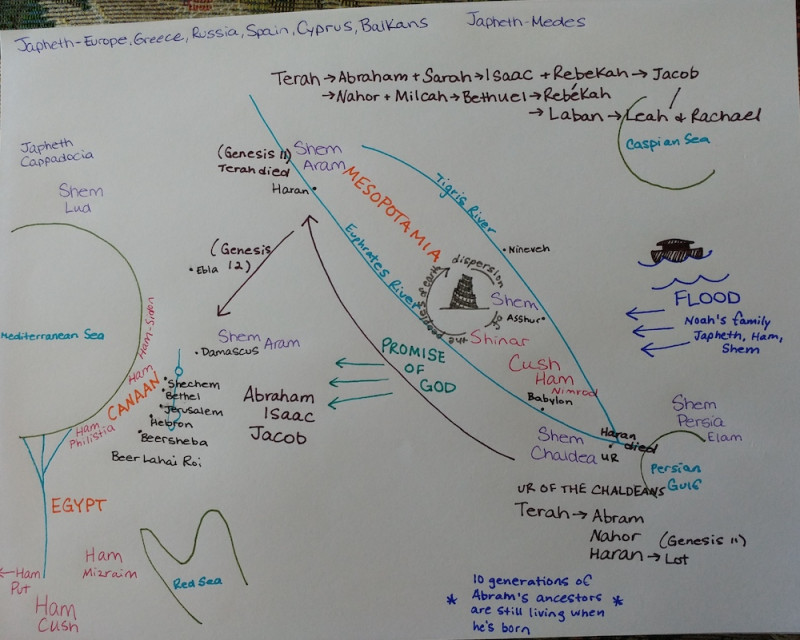